Between Shades of Gray

Summery via Goodreads:
Lina is just like any other fifteen-year-old Lithuanian girl in 1941. She paints, she draws, she gets crushes on boys. Until one night when Soviet officers barge into her home, tearing her family from the comfortable life they've known. Separated from her father, forced onto a crowded and dirty train car, Lina, her mother, and her young brother slowly make their way north, crossing the Arctic Circle, to a work camp in the coldest reaches of Siberia. Here they are forced, under Stalin's orders, to dig for beets and fight for their lives under the cruelest of conditions.

Lina finds solace in her art, meticulously--and at great risk--documenting events by drawing, hoping these messages will make their way to her father's prison camp to let him know they are still alive. It is a long and harrowing journey, spanning years and covering 6,500 miles, but it is through incredible strength, love, and hope that Lina ultimately survives. Between Shades of Gray is a novel that will steal your breath and capture your heart.

Review:
This book left me with an array of different feelings. Feelings of awe, of shock, of sadness followed me for days. I was so moved by many factors of this book. As a big fan of World War II historical fiction, I really enjoyed reading this untold side of the war. Both the Soviets and the treatment of Catholics during WWII are rather untouched subjects in the historical fiction world. This book contained both topics and I really enjoyed that.

Between Shades of Gray contained so many different themes that completely changed the way I look at some things. One of favorite themes is this-- is it better to be the one leaving or the one left behind?

I'm not quite sure what I think about that. I feel like it's probably worse to be the one left behind, as hard as it is to be the one moving on. I think we've all had the feeling of being left behind, whether we were left behind by a friend who was not loyal, a loved one who has passed on, or a friend who has had to move. But on the other hand, sometimes I feel terrified of living in a new place without everyone who has been so dear to me my whole life.

So, though I haven't been through nearly as many horrors as Lina has, I understand a bit of what she was going through. Ah, sometimes I feel like I can relate more to characters than actual people!

I'd love to hear your thoughts=) 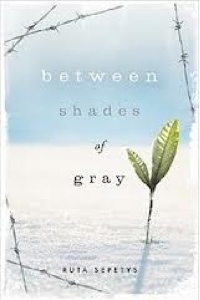