A Round of Happy Birthdays!

Happy birthday to Harry Potter, JK Rowling, and my baby-sister-who-isn't-a-baby-anymore!!!!

JK Rowling has seriously touched millions of lives and inspired millions of writers with the Harry Potter series. There are honestly very few books that have had such a strong emotional hold on me.

Afters months and months of pestering Catherine to read HP, she finally picked it up and fell in love almost as much as I did. And, actually, here's a picture of her reading it: 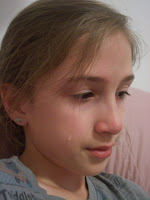 Appearently, we both get very emotionally involved with HP. She had just read about Lupin and Tonks dying. Poor kid.

What I wouldn't give to read HP again for the first time. *Sigh.*

I'm so blest by Catherine's life. I had to wait four loooong years for her=) She turns eleven today, which is way too crazy and makes me feel old. Before she was born, I would always tell my mom how unfair it was: she shared a room with my dad, and my brothers shared a room, but I had no one to share a room with! 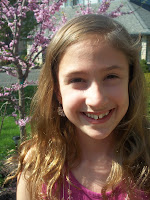 After Catherine was born, we moved to a bigger house and my wish came true. I finally had a sister to share my room with! And then, about a year later, another sister came along and I had TWO sisters to share a room with! Wasn't I lucky?!

I was a strange child.

. . .years later, we would fight over who got to have their own room in our new house. . .naturally, being the oldest, I won. Isn't it funny how much we change?

But I did share a room with her for ten years. She's a neat freak (like, a crazy neat freak. She looooves cleaning anything. Even like a bathroom or a kitchen.) and she's kind-of-sort-of rubbed off on me.

Catherine inspires me. So much.

She's one of the most giving people I've ever met. She will seriously drop whatever she's doing and listen and help with whatever problem. She has a beautiful smile. She has a beautiful voice. She loves to read and make up stories. She loves watching Pride and Predjudice with me. (BBC-- there is no other watchable version as far as we're concerned.) She read the first chapter of my book and is constantly asking me question after question about it. 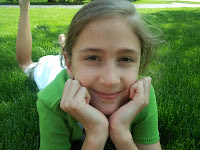 Catherine encourages me to press on with life, even when it's hard. When I have bad days, she makes me feel better. When my best friend and I resolved a very long fight we had, Cate was so excited for me. Everyone in my family couldn't believe that we were friends again, but Catherine told me how happy she was.

And sure, we argue just like sisters have since the beginning of time. We fight over the bathroom, over hair ties and bobby pins. . .typical girl stuff.

We were arguing about something a week or so ago, and I was clearly winning the argument, when Catherine exasperatedly threw her hands up in the air and said as she walked out of the room:

"FINE. But I get to marry SNAPE then. So THERE."

Isn't there a saying about how those who you love the most and who love you the most can also annoy you the most? Because if there isn't, there should be.

Anyway. . .Catherine rocks. And I'm so glad that she was born. 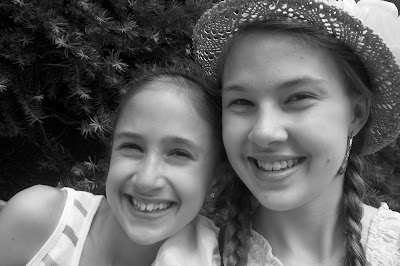 Happy birthday, baby sis. I love you forever<3
Posted by Unknown at 5:27 PM