So excited to be doing the A to Z Challenge for the second year in a row! I will be posting each day (besides Sunday) this month. I'll be posting things I've learned throughout high school.


A year ago this weekend, I made a DME retreat in my hometown of Erie, PA. It was insane.

A little background on the retreat...DME (Divine Mercy Encounter) was originally TEC (To Encounter Christ). My dad's parents were actually influential in bringing TEC to Cleveland, and my mom helped in bringing TEC from Cleveland to Erie,  before she even knew my dad, which I find slightly adorably hilarious. My parents both helped in running the retreats in Erie years ago, before I was even born, and remained involved when I was little. Needless to say, I was excited about making this retreat as my family had been a big part of it.

A little background on me going into the retreat...it had been an interesting school year. I had finally committed to praying every day in January and was heavily discerning God's will for my life and how to let Him influence every part of me. I was coming to grips with a lot that had happened to me before I had let Jesus into my life in a radical way.

So. I went on this retreat, expecting great things, but unsure of what exactly those things would be.

I could never, ever could have been prepared for what happened.

I got to this retreat and was immediately so blessed by the people who were working it. I had grown up with a lot of these wonderful men and women and it was incredible to journey with them towards holiness for the weekend (and even beyond). 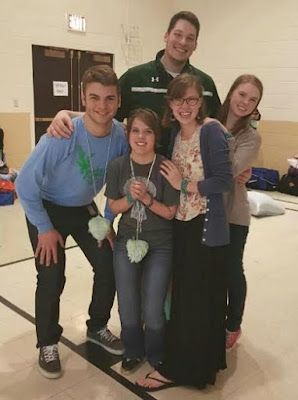 At the retreat, we were separated into groups, and one of my group leaders was an amazing woman from the school I went to my freshman year. Anna's joy rooted in the love of Jesus was so tangible and I saw God in everything that she said and did. She listened and talked to me like I was the only person in the room. That’s how she treated every single person she came into contact with. We shared so many tears, so much laughter, and an insane amount of love.

Anna's love for me broke a lot of chains that were holding me back. I was carrying a lot of hurt from feeling rejected and alone freshman year, and God totally used her love to heal me. Not only did He use her love, but He used the love of a few other girls on retreat also from the same school. They showed me the love of Christ by encouraging me, by accepting me, by loving me...not for anything I said or did, but just because of who I am.

All those at DME showered me with Christ's love. They treated me as a beautiful, new creation...someone worthy of love. People I had never met as well as people I hadn't seen in years took time to show me that not only was I lovable, but that I was worth loving. Through words and actions, people showed me that I show them Jesus Christ, simply by being myself.

That just broke down so many barriers that I had put up. I had become so bitter towards so many, including myself, I had lost faith, I had lost trust...and the LOVE of this community showed me the immense MERCY of Jesus and melted everything else away.

I was okay. I was made new, I was emptied. I remember being in front of Jesus in the Blessed Sacrament and just being. Just praising Him with every part of me. Resting in His love.

I encountered Mercy in a new, personal way that weekend. I encountered a God who accepts me for who I am, because that is who He created me to be. I encountered Love, who takes my hand and leads me forward without a mention of what is behind. The community at DME showed me that I am not alone. Not only do I have Jesus Christ living inside of me, but I am not by myself on this journey.

I was so overwhelmed by the love and mercy of Jesus Christ that weekend. I was so overwhelmed by His sacrifice for me...and His love exploding in my heart. I began recognizing Him in every memory, especially the painful ones. I saw how this community was loving my heart to life and the immense power of this love.

But the cool thing about the retreat is that I'm still on it. I'm still living the Fourth Day, as it is called. And on this Fourth Day, God has put into my heart a desire to just bring everyone this love and mercy I experienced at DME. I can't imagine having ever lived without it and I can't bear to think that anyone could think him-or-herself unloved.

This retreat set a deeper fire in my heart for Jesus and set the stage for some incredible experiences that I had later in the year. Honestly, though, all of the amazing things God has done in my life since then would not have been possible without DME...God removed so much pain and sorrow from my heart in order for me to truly love and be loved.

All I want to do is love on people. Not that I don't get annoyed with certain ones or hurt by others, but I just want to love. I want people to look into my eyes and see the attentive, personal love of Christ. I want people to read my words and come to recognize the mercy of God.

Our love has power, friends. You were created in the Image and Likeness of Love Himself...what a priceless gift. You are loved and you are given love to, well, love with.

Let's let Jesus love through us, pointing towards His infinite mercy.

I'm praying for you always.